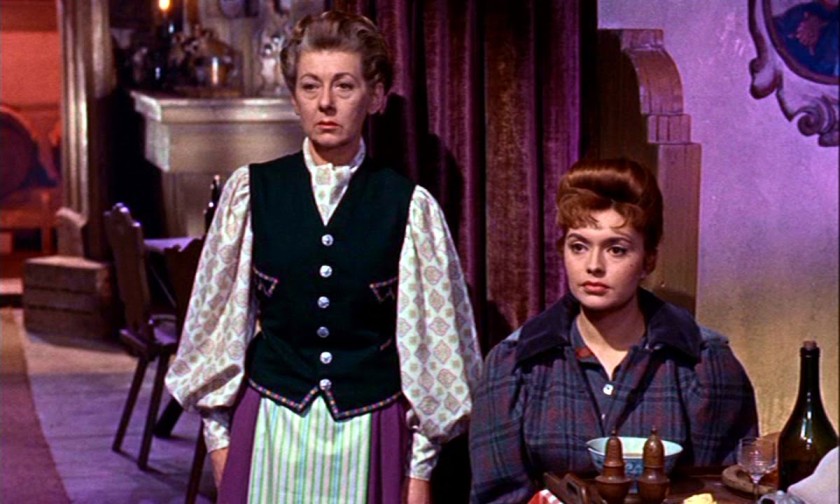 There are things we know, that – even though we know them – we can’t quite explain. Or at least, not well enough. There are times when we know something so well we take that knowledge for granted, to the point maybe that it’s almost – but not quite – forgotten. Ignored maybe. Undervalued.

And then there are those moments when we suddenly remember, when other people say it for us, when they perfectly encapsulate what we’d always known or felt, but couldn’t find the words for.

And there are the moments when, unbidden, we say something in the midst of conversation and we nail it ourselves. When suddenly we find the right words, quite by accident and reveal the idea to ourselves afresh, and somehow stronger, straighter, purer. It’s an epiphany of sorts, and the idea, for so long taken for granted, burns with brighter light.

I had one of these sort of moments while chatting with a friend about THE BRIDES OF DRACULA, recently.

Discussing the astonishing use of colour in the film, the use of pinks and purple, this came tapping out my finger tips:

“Cinematography like descriptive prose. In this case as voluptuous and rich as Oscar Wilde and to the same slightly sickly, suffocating end as his writing in Dorian Gray. Beautiful, decadent, menacing and perverse. Gorgeous.”

And that stuck with me: ‘Cinematography as descriptive prose’. The rightness of it felt like I’d just slapped myself out of a stupor. THAT’S what cinematography IS…

In fact I’d broaden it, that’s what Cinematography and Art Direction ARE. They are the descriptive prose of cinema. And that’s obvious, of course; it’s fundamental. It’s the core of ‘mise en scene’, the thrust of a lengthy essay that I wrote for Art Class at the age of 18 (camera, editing and cinematography as paint, brush and canvas), and yet… I’d never previously phrased it that way, and something about the phrasing struck afresh. And this particular comparision all the more.

This from THE PICTURE OF DORIAN GRAY:

“THE studio was ﬁlled with the rich odour of roses, and when the
light summer wind stirred amidst the trees of the garden there came
through the open door the heavy scent of the lilac, or the more
delicate perfume of the pink—ﬂowering thorn.

From the corner of the divan of Persian saddlebags on which he
was lying, smoking, as was his custom, innumerable cigarettes, Lord
Henry Wotton could just catch the gleam of the honey-sweet and
honey—coloured blossoms of a laburnum, whose tremulous branches
seemed hardly able to bear the burden of a beauty so ﬂame—like as
theirs; and now and then the fantastic shadows of birds in ﬂight
ﬂirted across the long tussore—silk curtains that were stretched in
front of the huge window, producing a kind of momentary Japanese
effect, and making him think of those pallid jade—faced painters of
Tokio who, through the medium of an art that is necessarily
immobile, seek to convey the sense of swiftness and motion. The
sullen murmur of the bees shouldering their way through the long
unmown grass, or circling with monotonous insistence round the
dusty gilt horns of the straggling woodbine, seemed to make the still-ness more oppressive.”

Notice the way that Wilde uses specific words to give the scene a certain colour, the names of flowers – rose, lilac, laburnum – but also honey, flame, jade, gilt. All words with further connotation. In the flowers and colours we see the room suffused in pink and purple, but also cloying in the mingled sweetness of their scent. Wilde makes note of the ‘honey-sweet’ laburnum, but we’ve already taken in the rose and lilac and the pink flowering thorn. An overbearing sweetness that bears a note of threat: it’s suffocating. Sweet smells, but the piercing point of thorns in amdist. The honey which gives the room a sense of the air being thick and sticky, one might find it hard to draw a breath. The whole passage – the very opening of the book – is suffused with it, an air or opulence, softness, decadence, comfort and sweetness gone – or going – bad.

Now look at the use of colour and art direction in THE BRIDES OF DRACULA, and tell me that Terence Fisher and his superlative cinematographer Jack Asher aren’t doing exactly the same in relation to their antagonists, the Baroness Meinster and her son…

The use of rose and lilac and purple are much the same, splashed and suffused across Bernard Robinson’s beautiful sets, opulent again (see the way stained glass criss-crosses the frame), in relation to the Baroness, with sets of white and marble. But also how this light contrasts with the browns and grey and blacks of the world outside the castle. What should be beautiful becomes corrupt, an ill fitting contrast to the earthy ‘reality’ of the working classes ‘outside’. But the colour is there… in all the town sets, and thus the influence of the Baron and Baroness, is there; intruding, insinuating. A corrupted decadence. 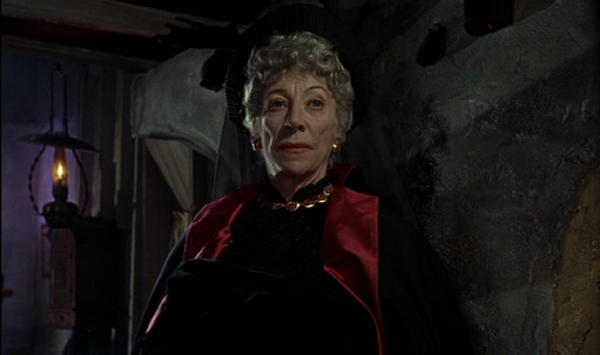 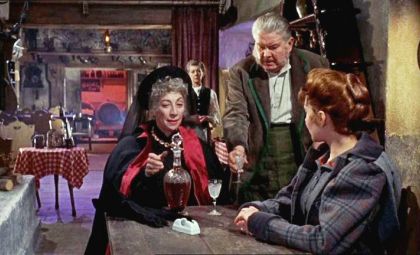 The Baroness enters a tavern and the purple light follows 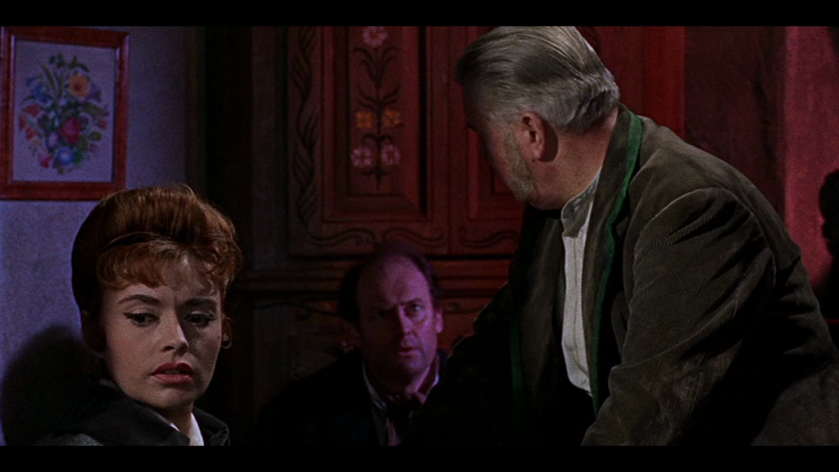 Milder hints, but still there’s a rose and lilac tint to the scenes, even across the colder stone and fabric tones…

The castle lit from within, rose and purple tones exude 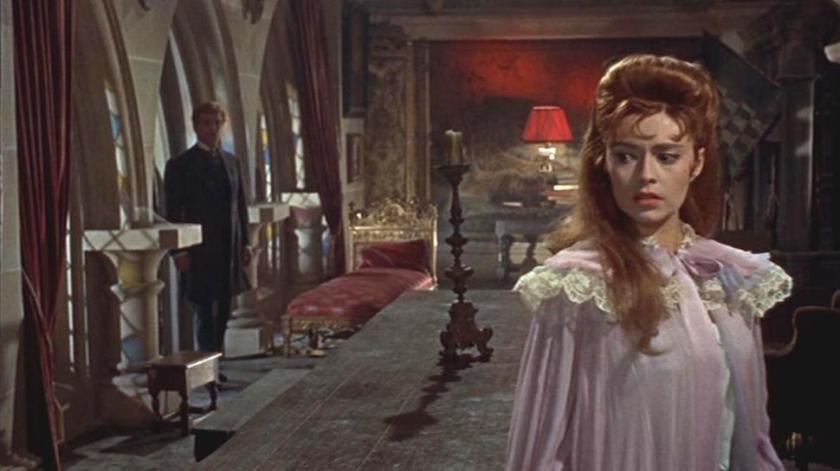 Of course, none of this is revolutionary. It’s basic. So why has it grabbed me so hard? With such startling, and suggestive clarity?

Perhaps because – and yes like so many other things, it does come back to this – beneath the fog of depression, my brain seemed to forget. Like a cataract clouded eye, it could no longer focus, no longer see… and with it gone, I get to appreciate the clarity I now find with a fresh and vivid intensity.

Over the last year, as my first book project as editor has progressed, and as more recently, a ‘To Be Announced’ project on which I’ll act as Series Editor has been picked up; I’ve been loving my role as editor (a role I never planned for, but which suits me to a T); wherein I can play midwife to other people’s writing, other folks ideas.

But reconnecting to my subject with a new found (or re-discovered) sense of clarity, is another indication of how much I have healed. Enough that I am writing again – here and elsewhere. Birthing my own ideas, and not just being midwife to so many others. Lowering myself gently into the word pool, feeling ready to take a swim.