It may not have been a natural birth, stitched together as it was from the flesh of other fictions, given life by the lightning bolt of Fear… still, it was 200 years ago this June that, by most accounts, Horror as a genre was born.

Brian Aldiss in his TRILLION YEAR SPREE cites Mary Shelley’s FRANKENSTEIN as ground zero for SF as a genre. While Sir Christopher Frayling begins his NIGHTMARE:The Birth Of Horror, with FRANKENSTEIN and how it came to be.

That ‘Haunted Summer’ on the shores of Lake Geneva, within the walls of Villa Diodati has a lot to answer for… and to celebrate, since not only did it result in the creation of FRANKENSTEIN, but also, indirectly, to DRACULA, in the writing of John Polidori’s THE VAMPYRE, and indeed in the figure of Byron himself, who directly influenced Polidori’s depiction of Count Ruthven, and the iconic image of every darkly handsome, gloweringly dangerous vampire thereafter.

From this night, when Byron, Shelley, Mary (then Mary Godwin) and Polidori told ghost stories comes one of the most influential books in the English Language and indirectly, an entire genre – one from which that most vampiric of arts, the cinema, has drunk deeply.

“Cinema comes to life in the dark – like Dracula.” – David Thompson

Given the immense influence of these books, these people and that night on our culture – artistically and otherwise –  why then does there seem to be so little celebration of it?

The BFI in their infinite wisdom chose to hold a huge celebration of Gothic and Horror Cinema a couple of years before this momentous date… which seems rather short sighted. They couldn’t have waited?

The way that TV and Literary subjects so often tie together now – see the recent spate of books and TV series about Russia, or those which ties very sensibly to specific historic events like the Somme, you’d have thought they could have held on just a little, in order to ensure blanket coverage.

As it was, the BFI Gothic celebrations were an immense success, but it’s hard not to feel that the Official bastions of our cultural and artistic heritage once again have slighted or underestimated the genre. Don’t quite take it seriously enough to think it warranted the extra effort, or the wait. Or perhaps just don’t see this moment in our cultural history for what it really is: One of the most important events in the history of art. Literary in it’s basis, but infinite in its influence both in subject and in style.

Similarly, though Mary Shelley lived for many years in the city of Bath and wrote much of FRANKENSTEIN there, that city still has not recognised her, nor the place where she lived and wrote with the ‘Blue Plaque’ seal of official approval, despite the fact that she is hands down one of Bath’s most famous residents, and despite the efforts of Sir Christopher Frayling, Angela carter and others to encourage the city to do otherwise. Jane Austen is their cause celebre… the respectable face of their literary heritage. Not this rebellious young woman who eloped with her lover, spent a summer with the ‘mad, bad and dangerous to know’, and wrote a novel which got so under the skin of its readers as to never have left their nightmares since.

Perhaps that’s as it should be. Horror is, after all, a ‘disreputable’ genre. It’s meant to be the outlaw, the outsider. The genre that dares to challenge and attack and shake things up. But when it has so much influence, when it has borne GREAT and LASTING works of art, it still bothers me to see them diminished, ignored, or not given their due.

SO, while the cultural capital was a little premature with its ‘Petite Mort’ for horror (left the money on the dresser and walked out of the door)… up North we embrace it and declare undying love. Darkness and Shadow are part of the lands in which we live. We seem to occupy a similarly ‘outsider’ status, and we recognise one of our own.

It makes me proud  to see the way Newcastle has NOT forgotten, and indeed is celebrating this momentous anniversary with a series of lectures by Gail-Nina Anderson and our own NOVOCASTRIA MACABRE screening of Ken Russell’s GOTHIC at Newcastle Castle, which dramatises the events at Villa Diodati in a way that comments on them, the people involved, and the genre they begot, with Stephen Volk (screenwriter of GOTHIC as well as GHOST WATCH, AFTERLIFE, THE AWAKENING, MIDWINTER OF THE SPIRIT and more) and  David Pirie (who quite literally wrote the book on British Horror Films and the importance of Gothic Horror to our culture with A HERITAGE OF HORROR: ‘The Gothic is to Britain as the Western is to America’) in discussion after the film, chatting about the making of the movie, it’s conception, and the importance of the events depicted.

We’ve had our Shakespeare celebrations this year.

If you love the darker side of literature, the dangerous free spirits of Horror, Fantasy and SF, this is your moment. This one’s for YOU. Villa Diodati is YOUR Stratford Upon Avon. The theatre of your mind’s eye, The Globe. And whatever dark entity was conjured from the collective fears of Byron, Shelley, Mary and Polidori… that’s YOUR Shakespeare.

GOTHIC news and reviews at stephenvolk.net 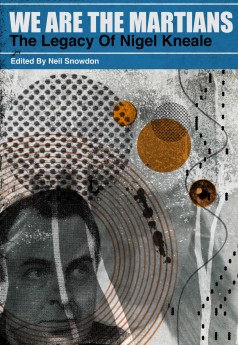 Toward the end of last year, my first book as editor ‘WE ARE THE MARTIANS: The Legacy Of Nigel Kneale’ was ‘launched’ at an event that was held as part of The Miskatonic Institute Of Horror Studies season of lectures, at the Horse Hospital in London.

It was an extraordinary night. I still pinch myself to think that it ever came together.

As part of a celebration not only of the book, but the astonishing work of Nigel Kneale, Jonathan Rigby lead a cast including Mark Gatiss and Jason Morell (son of Quatermass actor Andre Morell) in a rehearsed reading of Kneale’s lost drama ‘THE ROAD’, written and broadcast in 1963, wiped by the BBC soon after and never seen or heard since.

And everybody shivered. The cast were uniformly brilliant and even like this, with the cast sitting in a row on stage with scripts in hand and Jonathan reading the descriptions of action and sound, the drama was riveting. A frisson rippled through the room at the climax as hairs stood on the back of a hundred necks in unison. Proof positive that the power of Kneale’s writing remains undimmed after all these years.

After which I nervously got up and lead a discussion about the book and Kneale’s work with a number of the contributors.

We had a whale of a time, and from what people said after the event, so did the audience. It felt as if on that night, in that room, something shifted. The tide turned in making more people aware of Nigel Kneale’s incredible legacy. His incredible influence on TV drama in the UK and the genre at large. 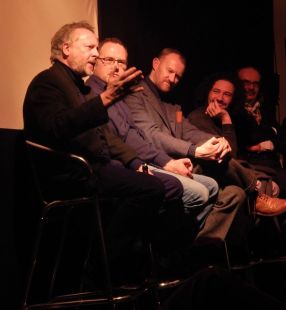 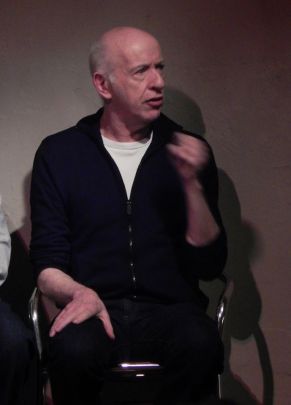 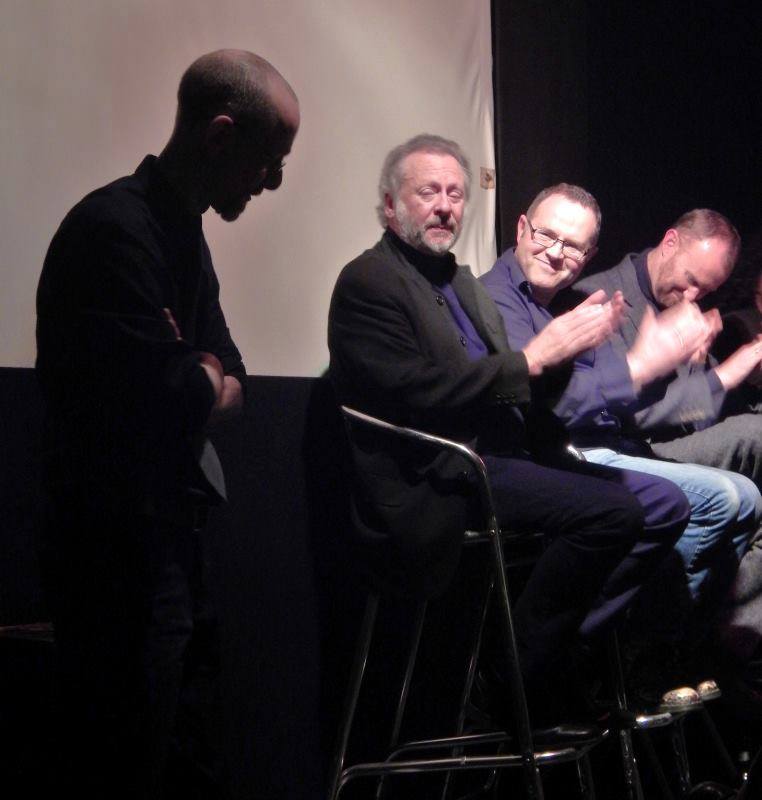 It’s a very strange feeling to get applause from people you’ve admired for years. But it was an incredibly gratifying, proud and humbling moment when Stephen Laws stopped the proceedings and asked everyone gathered to join him in saying ‘Thank you’ to me for my work on the book and for the event that was now wrapping up. The book, the event, the attention and appreciation for Nigel Kneale, had all been ‘a long time coming’.

I don’t mind admitting that my eyes may have been a little damp.

All the more disappointing then that, shortly after that, the original publishers – Spectral Press – ran into severe financial troubles. Faced with an uncertain future for them, and if/when the book would now see print, I took the difficult decision to remove the book from Spectral and search for a new publisher.

Thankfully that didn’t take long, and the book will now be published by PS Publishing later this year or early in 2017 (as soon as there’s a date you can be sure I’ll shout it from the rooftops).

However, cash flow problems at Spectral made it impossible to simply transfer the existing pre-orders over to the new publisher. It has also meant delays in some people getting refunds, though I’m informed that most have now received them (if you are one of the people who pre-ordered the book and HAVEN’T had a refund yet or are just finding out about the situation PLEASE contact Gary Compton via spectral@ticketyboopress.co.uk or spectralclaim@ticketyboopress.co.uk).

There has been a lot of of heated discussion on social media about the Spectral Press situation. And while I’ve been unhappy with the way it has been handled – particularly with regard to the many customers who have supported this project from the start and who I feel particularly concerned for – any problems I have are between myself and the publisher.

What I know is that the book is good. The book is worthwhile. And the book is alive! It will return! That’s not just my opinion either. Just before the launch event SFX Magazine ran a 5 Star review that knocked me flat, it came so out of the blue…

I worked long and hard on this book. The journey of putting it together has been the journey of my life from amateur to professional as a writer and an editor. I’ve made incredible friends and met incredible people in the course of this. Spoken and worked with people whom I count as personal heroes going back many years. The passion and goodwill that has been shown to me and to this project has been humbling and inspiring at every turn. Kneale affected people deeply. That’s why they wanted to be involved, wanted to pay homage to him and his legacy. To the way he changed our lives. He changed mine when I first saw QUATERMASS AND THE PIT. My decision to write about him turned my life around in professional and creative terms.

Aim For The Heart. It’s the only way.